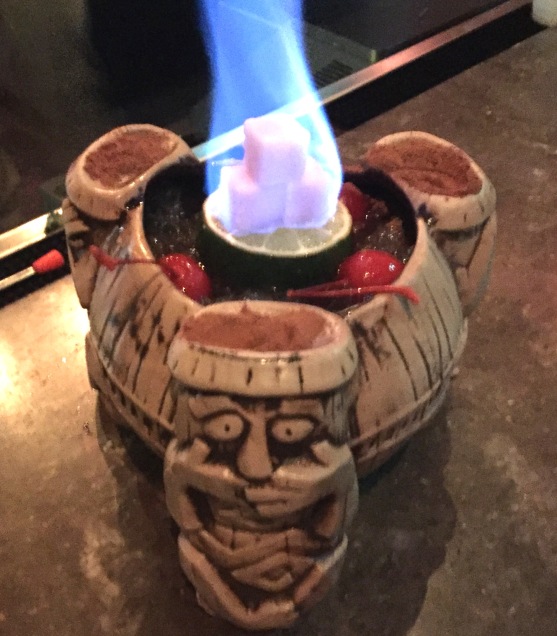 We’ve been on a tropical drink kick since we went to the Purple Orchid in El Segundo (see our recipes: Vic’s Grog and Virgin Vic’s), so decided to check out Trader Sam’s Enchanted Tiki Bar when we stayed at the Disneyland Hotel this weekend for the 10K race. Unlike Walt Disney’s Enchanted Tiki Room in the park, this one serves alcoholic drinks. We ordered the Uh-Oa! (pictured above), which is made with light and dark rums, orange, passion fruit, guava, pineapple, grapefruit, and lime juices, falernum (a spicy-sweet syrup) and cinnamon. The sugar cubes on top of the lime are soaked in liquor and lit on fire.

When the bartender brought out our drink, he started chanting “Uh-Oa!” and spraying water into the air. The room dimmed, thunder roared, and rain appeared outside the windows! The bartender told us to throw cinnamon onto the fire to create sparks. This wasn’t the only drink that came with magical effects: ordering the Krakatoa punch caused a volcano to erupt, and ordering the Shipwreck caused (you guessed it) a shipwreck. We definitely felt like we were at Disneyland, only with drinks! We’ll try to recreate the Uh-Oa! in a later post.

(Update: The next time we went to Trader Sam’s, the bartender gave us the recipe and we recreated it at home; see our post Uh-Oa!)

If you’re at California Adventure Park, and are in the mood for a more relaxed bar experience, try Carthay Circle Lounge.