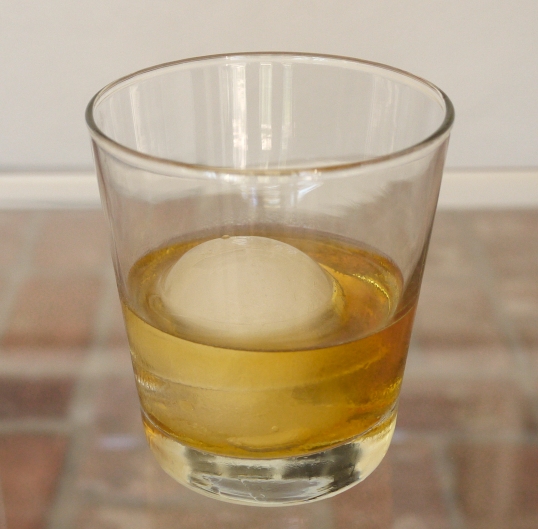 Shake ingredients with ice. Strain into an ice-filled rocks glass.

This cocktail is similar to the Rusty Nail, but uses amaretto instead of Drambuie. It’s less herbal and also less sweet, so the whisky itself stands out more, along with toasted almond notes.

Believe it or not, this post is also inspired by our recent trip to Japan. We visited some amazing bars in Tokyo, but in Kyoto, we’d read that the local bars might not welcome strangers without an introduction from a regular. Fortunately, we saw a British pub called Man in the Moon right across the street from our ryokan. We figured we’d have no trouble there, and in fact it was our favorite drinking experience in the city.

I ordered a Rusty Nail made with Japanese whisky.  It turned out that the British pub didn’t have Drambuie (!), but the bartender suggested a Godfather instead, saying the Japanese whisky and amaretto would balance each other nicely. I typically prefer the herbal complexity of a Rusty Nail, but the Godfather with Japanese whisky was delicious. Besides that drink, we enjoyed a Negroni and “American” (microwave) popcorn. We definitely recommend Man in the Moon pub if you are feeling a bit homesick in Kyoto.

The whisky.  We used Yoichi single malt whisky, produced by the Nikka Whisky company in Japan. It’s quite smoky. If you prefer a less smoky taste, we’d recommend Nikka’s Miyagikyo single malt. Or you could go with a blended whisky: my Godfather at the Man in the Moon was made with Hibiki Japanese Harmony, a blended option from Japan’s other top whisky producer, Suntory.

The amaretto. Amaretto is a caramelly, almond-flavored liqueur from Italy. We used Disaronno, the most popular brand.

The ice sphere. We used a Trudeau ice sphere tray.